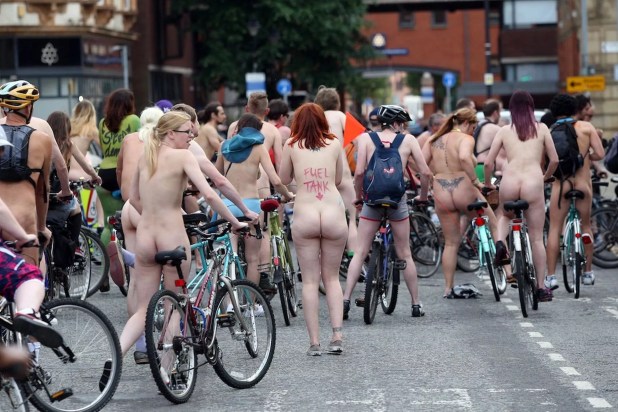 Hundreds of naked bike enthusiasts have swarmed through Manchester city centre in a mass show of cycling solidarity.

At 7pm on Friday the crowd of bare bikers left All Saints Park on Oxford Road to streak through the city streets – causing crowds of onlookers to stop and stare open-mouthed, reports the Manchester Evening News.

To wolf-whistles and car horns the crowd of male and female cyclists – some with environmental slogans emblazoned across their backs – rode around the city centre before heading back to where they began.

Organiser Sean Fitton said there were more than 200 participants for the 2014 event – double last year’s turnout.

“It was amazing,” he told the MEN.

“There were a lot more people here so it was just huge. Nice weather certainly helped for a start.

“I didn’t do that much promotion so there must have been an awful lot of word of mouth going on.”

The peaceful event – mirrored the world over – gave after-work drinkers an eyeful as they soaked up the evening sun.

Sean said the event aims to be not just a celebration of cycling but to impart a serious message.

There is a huge and growing cycling community in Manchester, he said, particularly around the monthly Critical Mass event, which fills the streets with cyclists on the last Friday of each month.

He added: “What we want is for people to get on their bikes. It’s to show cycling is a fun and feasible way to get around.

“We are not saying don’t have a car. We are saying get on a bike and enjoy it.”

Despite the fact the vast majority of cyclists bared all for the ride, he said it is vary rare for anyone to take offence.

“In Manchester there is very little of that. I think we had one person who didn’t like it – everyone else cheers and jokes,” he said.

City centre police inspector Phil Spurgeon said beforehand that GMP would be ‘monitoring’ the ride, adding: “Last year’s event did not cause significant disruption and did not attract any complaints.

“We understand that there will be differing views on the event, but nudity itself is not an offence.”

Wearing of miniskirts could soon land one in jail or attract heavy fines if Parliament approves a new piece of legislation that seeks to further clarify the offence of pornography in Uganda’s laws. The government is riding on its view that pornography has become such an “insidious social problem” to get the Bill through […]

Chief Obafemi Awolowo, leader of the banned Action Group and leader of the Yorubas of western Nigeria, was born on March 6, 1909. Son of a farmer and self made man, Chief Awolowo was educated at Anglican and Methodist schools in Ikenne, his home town, and at Baptist Boys’ High School in Abeokuta, Western Nigeria. […]

Should friends fund your marriage Introduction?

Some of the gifts presented to a girl’s family during the Introduction Ceremony. PHOTO BY ABUBAKER LUBOWA  Pooling resources. Finding a potential wife today is one thing, and yet when you do, marrying her is something else. As is the norm, people have sought financial help from friends to fund their marriage ceremonies, but how […]