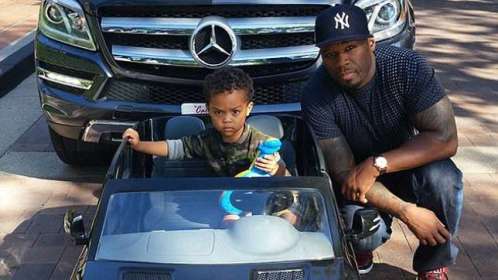 50 Cent has surprised his son on his 2nd birthday with a miniature motorized Mercedes ML450 SUV or precisely a junior version of his own ride.

According to close sources, the ‘Window Shopping’ rapper gifted his boy in Los Angeles this weekend with the sweet little car which he reportedly shopped himself.
The motorised Mercedes ML450 SUV was posted on 50′s Instagram account with a caption that read, “Lol he make me look like I’m getting soft. Lil50 trippin LMAO#SMSAUDIO #thebeauty.”
Father and son spent the weekend together eating lots of birthday cake and 50 also footed the bill for his big party on Monday.
Funny thing about this is, back in May, the rapper was denied access to his 16 year old son’s graduation ceremony. He later blamed it on his baby mama claiming he was never told about the exact date of the event. It was the same son he publicly went into a ridiculous twitter war with last year.

KIM KARDASHIAN and KANYE WEST have spent just over £500,000 thats about 1.2 billion naira on four gold-plated toilets for their new gaff. The couple have been staying with Kim’s mum KRIS JENNER while work on their new mansion in LA’s Bel Air is finished. Now that they have a completion date they have started […]

‘I was raped by my step-father,’ raunchy singer says on Father’s Day – Maheeda

As several individuals and celebrities celebrate their fathers on Sunday, June 21, 2015, raunchy singer, Maheeda has announced that the celebration isn't for her. Maheeda revealed that she won't be celebrating the Father's Day as her father left her at the tender age of five months while her step-father, who is supposed to be a […]

I have never fought over any man. Men are just too many. I cannot fight over any man. Why will a girl fight me over a man? The kind of men I have dated (they are not many though) don’t have eyes for other women when they are with me. If you are in a […]